What will PG&E Corp. look like when it emerges from bankruptcy, and who should control the beleaguered company as it tries to rehabilitate itself after causing a series of disasters in the past decade?

Two rival sets of investors, many of them hedge funds, think they have the best answers to both questions. Each is angling to get its plan for PG&E’s future on the winning track, and the dispute is headed toward a critical courtroom juncture this week.

The result could have a long-lasting impact on the makeup of California’s largest utility and the 16 million people it serves. That’s partly because the two groups have different visions for how PG&E should be overseen and the right way to resolve the most urgent problem facing the company: liabilities arising from the deadly wildfires its power lines ignited.

On one side, a group of PG&E’s current equity owners — supported by company management — want to pay for past wildfire claims in large part with new bonds the utility would gradually pay off by diverting some of its profits. Even though it would lower future returns, the move would allow the current equity owners to maintain control of the company during its reorganization. PG&E would need the Legislature’s approval to enact that strategy.

On the other side, current PG&E bondholders want to inject billions of dollars of new money into the company in exchange for a large amount of stock, giving themselves control and substantially diluting current shareholders’ stakes. That plan, as currently envisioned, would also entail another shakeup on the board of directors — which could then change the company’s executive leadership if it desires. Like the other proposal, it is also designed to resolve wildfire claims without raising rates.

The bondholders want U.S. Bankruptcy Judge Dennis Montali to let them formally introduce their proposal, since they are not allowed to do so yet. That’s because federal law gives businesses that file for bankruptcy protection the sole right to propose a reorganization plan — the blueprint for the company’s exit from bankruptcy — at first.

Montali has extended PG&E’s so-called “exclusivity period” until Sept. 26, but now the bondholders want the deadline terminated sooner. The judge is scheduled to consider the matter at a hearing in San Francisco on Wednesday.

Frank Pitre, a Bay Area attorney who represents wildfire victims against PG&E, said he has yet to see a proposal that provides enough compensation for his clients. California just passed a new law that creates a $21 billion fund to protect electric companies’ future wildfire costs, but the fund won’t be used to pay for costs arising from fires that already happened. PG&E has to figure out how to pay those as part of its bankruptcy case.

“The bondholders are trying to make a good deal so they can make a whole bunch of money when PG&E comes out of bankruptcy and buy the company as cheap as they can buy it,” Pitre said. “The equity owners are trying to preserve shareholders. Right now it’s a game between the two … and each one has their own interests.”

Pitre said fire victims could present their own plan to restructure PG&E. Insurers with claims against PG&E might also submit a plan.

Still, if either the bondholders or the current stockholders prevail in their fight for control, the winning side could make a lot of money.

In fact, three hedge funds that have invested in PG&E already stand to reap large profits if the company’s shares — which closed Monday at $17.65 — continue trading around their current prices or higher. 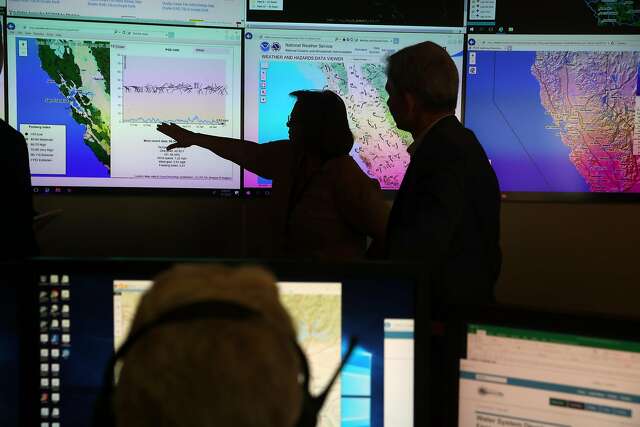 The firms — Abrams Capital Management, Redwood Capital Management and Knighthead Capital Management — all bought millions of PG&E shares around the time the company and its subsidiary Pacific Gas and Electric Co. filed for bankruptcy protection and the weeks afterward. The stock has since substantially appreciated: As of this month, they were sitting on a collective profit of about $450 million, according to a Chronicle analysis of Securities and Exchange Commission filings. 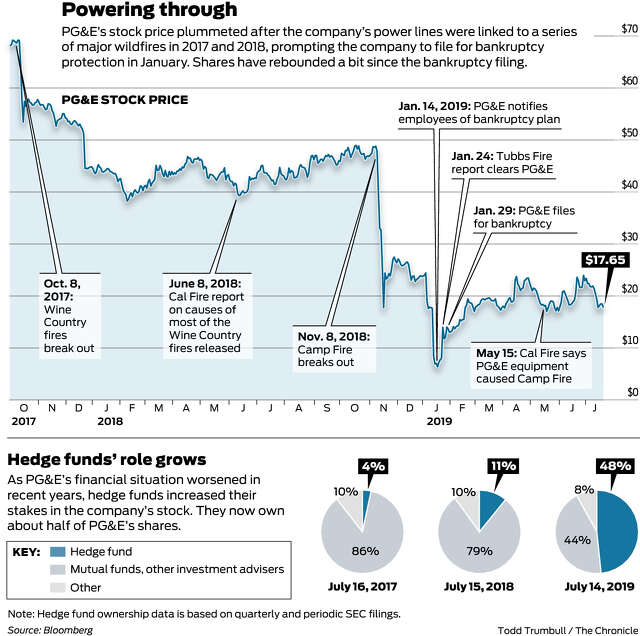 It’s normal for hedge funds — which make risky investments by definition — to acquire stakes in a distressed company. It is also normal for them to profit from the risks they take.

“Wall Street is convinced that this is a solvent debtor, that the company will have enough money to pay off all its creditors, and the existing shareholders are still going to own the company and that it’s an attractive investment going forward,” said Jared Ellias, a law professor at UC Hastings College of the Law.

The influence of hedge funds at PG&E is concerning to employees, according to Tom Dalzell, business manager of IBEW Local 1245, the largest union of PG&E workers.

“We’re dealing with people who do not have a long-term interest or commitment to a gas and electric utility,” he said.

As PG&E was considering changes to its board of directors while looking for a new chief executive this year, Abrams, Redwood and Knighthead banded together to influence the process. The three hedge funds supported the people PG&E chose to sit on the board — an almost entirely new set of directors — and the company’s selection of Bill Johnson, formerly head of the Tennessee Valley Authority, as CEO.

The same hedge funds also support PG&E’s plan to resolve its 2017 and 2018 wildfire claims through a new financing tool the company calls “equity contribution bonds.” PG&E believes it would not have to raise rates because shareholders would reduce their earnings to pay off the bonds, according to people familiar with the matter. The sources asked not to be identified because they were not authorized to speak publicly about the plans.

PG&E tried to get state lawmakers to allow the bonds as part of the bill they recently passed to address the future wildfires and regulation of investor-owned utilities. The efforts were unsuccessful, but the company and supportive stockholders may try again.

The equity-side hedge funds view the PG&E-backed plan as a better way to attract more traditional utility investors such as retirement funds and other money managers seen as having long-term interests in their investments. Dilution of the current equity owners at the scale of what the bondholders have suggested could be discouraging to future investors, sources said.

But the bondholders have pushed for the right to introduce their own plan in Bankruptcy Court, accusing PG&E of failing to develop its own plan quickly enough.

In court papers, they have outlined a strategy to invest more than $30 billion into the company through a mix of equity and debt. They would benefit by becoming PG&E’s new controlling owners: A $19 billion to $20 billion equity investment would give the bondholders an 85% to 95% stake in the company, according to court papers they filed last week.

Bondholders have said they would steer at least $16 billion of their investment into a trust to pay claims arising from the 2017 and 2018 wildfires.

The bondholders include the hedge fund Elliott Management Corp., which has about $1.2 billion in senior notes of PG&E, and the Pacific Investment Management Co. LLC, a fixed-income manager that has about $2.8 billion in various kinds of the utility’s debt.

If their plan comes to fruition, it would likely usher in another changeover of the entire PG&E board, according to a source familiar with the bondholders’ thinking who was not authorized to talk about the plans publicly. As described in court records, the plan would let three seats on the board be nominated by IBEW, The Utility Reform Network consumer group and the new wildfire fund the state is creating to shield utilities from future fire costs.

Mark Toney, the reform network’s executive director, said his group has not taken a side on which plan is better but supports the idea of ending PG&E’s exclusive right to file a plan.

“The sooner the plans are on the table, we believe the sooner a resolution can be reached, but we have taken no position on the merits of the bondholder proposal,” Toney said.

In a separate court filing, attorneys for a group of PG&E stockholders — including the Abrams, Redwood and Knighthead firms — which collectively own over 35% of the company’s common stock called the bondholder motion “a naked attempt to seize control of PG&E at a fire sale price.”

Ellias, the Hastings professor, said the judge will likely signal to PG&E that he is taking the bondholders’ motion seriously. But he doubted that Montali would end PG&E’s exclusive right to file a reorganization plan just yet.

In any case, the restructuring plan is bound to have a major impact on PG&E consumers because it will determine the financial state and structure the company has when it emerges from bankruptcy protection.

“In general, the better resourced PG&E is coming out of bankruptcy, the better prepared they’re going to be to invest in their grid and to pay future fire claims without having to ask ratepayers to do it for them,” Ellias said.

All sides are under pressure to get their dispute resolved quickly. The recently authorized legislation creating the new wildfire fund says PG&E can’t access the financing mechanism unless it gets out of bankruptcy by the end of June 2020.

GET ICE OUT OF OUR REFRIGERATORS- STOP Smart Meter Spying!

The problem: Farfetched as it seems, smart meters can give away an enormous amount of information about customers, and Immigration and Customs Enforcement (ICE) wants it.  Federal immigration authorities are