Pacific Gas and Electric Co. asked regulators Thursday for permission to raise nearly $2 billion in new revenue from ratepayers over three years, starting in 2020, with more than half the proceeds going to cover wildfire prevention work.

If it is approved by the California Public Utilities Commission, the proposal would increase an average residential customer’s bill by 6.4 percent, or $10.57 per month in 2020, PG&E said.

The request was made as part of the routine process through which the utilities commission authorizes the amount of revenue PG&E is allowed to collect from customers over a three-year period. PG&E’s next rate request covers 2020 through 2022.

Separately, PG&E is also seeking the commission’s approval for a six-year rate increase in a different case involving the decommissioning of the Diablo Canyon nuclear power plant on the Central Coast. That proposal would increase the average residential customer’s monthly bill by 2 percent, or $1.98, PG&E said.

If the first general rate increase is approved, PG&E said the new money will allow it to install 2,000 miles of stronger poles and covered power lines in areas where fire risk is high.

Other plans include stepping up the utility’s efforts to maintain 120 million trees at risk of growing or falling on power lines, using SmartMeter technology to respond better when lines fall down, adding 1,300 weather stations in risky fire areas by 2022 and installing 600 high-definition cameras to detect fires. 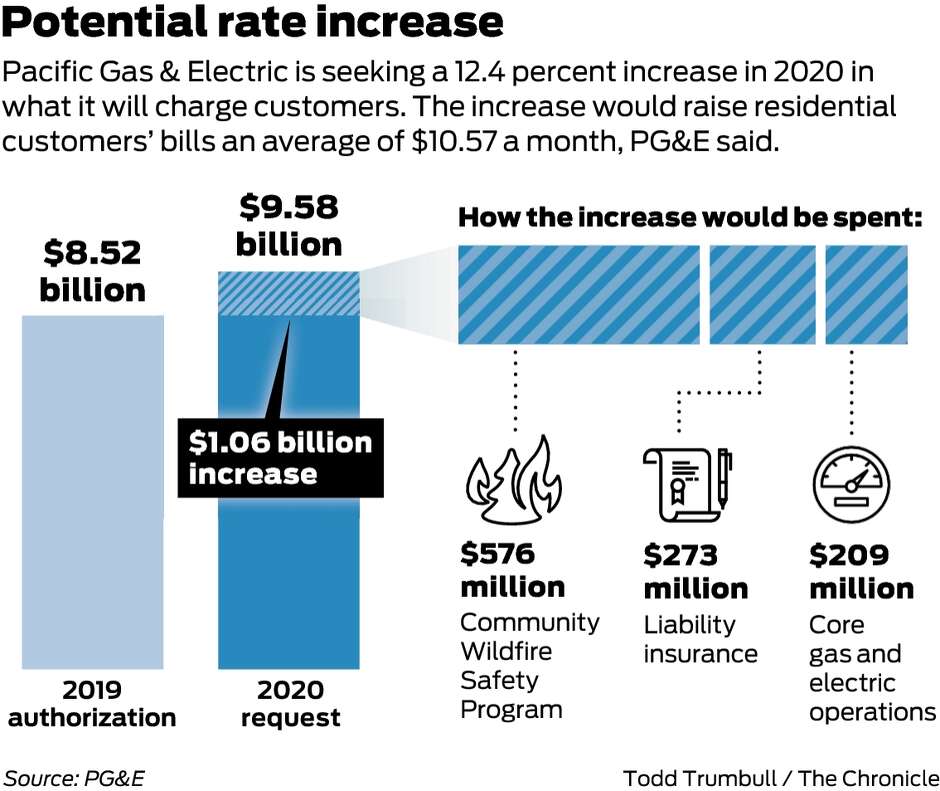 None of the new revenue would go toward any claims stemming from the devastating Camp Fire or the 2017 North Bay firestorm, PG&E said. Authorities are still investigating the cause of the Camp Fire and the Tubbs Fire, the most destructive blaze from last year, but PG&E equipment may be to blame in one or both cases. State officials have already said PG&E equipment sparked 17 fires in Northern California last year.

The funds also will not go toward executive compensation at the utility or its parent company, PG&E Corp. — which is no longer allowed because of legislation passed this year.

The same legislation, SB901, may also result in even higher electricity prices for Northern Californians. It allows PG&E to issue bonds for wildfire-related costs that would be paid off by customers — with the permission of regulators after the utility has passed a “stress test” determining the maximum amount it can pay without harming utility customers.

State officials say the new law permits PG&E to issue such bonds only for the 2017 fires. But a key Southern California legislator is working on a new bill that would reportedly extend the same process to fires that broke out this year.

Thursday’s rate request comes at a difficult time for PG&E, which faces mounting legal and regulatory problems after two years of historically devastating wildfires. And California customers already pay some of the highest electricity prices in the nation.

“We recognize that any increase to a customer’s bill can be a significant impact,” said PG&E spokeswoman Lynsey Paulo. “This funding is really going to help PG&E make the enhancements that we need to make … with regards to reliability and resilience and safety for the benefit of our customers. The threat that we are facing today with this ever-increasing risk of catastrophic wildfire and extreme weather is not going away.”

“This is huge. We think the commission should demand an accounting for all of the wildfire and safety money that PG&E has already received from ratepayers, and what’s happened with that money, before they get a single dime,” Toney said. “We’re at the point now where it seems like all the money in the world is not gonna be enough.”

The rate request before the state utilities commission pertains only to the distribution and generation of electricity and gas, Paulo said. It does not cover transmission towers — such as the one located near the origin of the Camp Fire — because those are regulated at the federal level, she said.

The utility has a separate case before the Federal Energy Regulatory Commission seeking to raise $171 million in revenue, which would amount to about $1.50 per month more on the average residential customer’s bill, Paulo said in a follow-up email.

PG&E filed the federal request in October. Paulo said it reflects the unique threat of “extreme, climate driven wildfire,” which she said “must be factored in to the costs associated with providing safe and reliable electric transmission service in the company’s service area.”

PG&E plans to conduct a series of public meetings across its service area next year to gather input about the rate proposal before going back to the utilities commission, which has the final say.

Can you blame us? PG&E, the criminal felon responsible for the deaths of over 100 of its customers, wants pre-payment of $1.4 billion of your money, ostensibly for wildfire safety.