Pacific Gas and Electric Co.’s strategy to avoid fires by shutting down power lines succeeded for the most part this week. But past missteps haunted the company as it got word of a proposal to fine it $165.7 million over failures during a similar effort a year ago.

The utility reported dozens of cases of damage to lines it deactivated as winds pummeled hills beginning Sunday. The move to power down lines may have spared Northern California the fate of Orange County, where a power line is being eyed as the potential cause of a major fire.

Yet controversy over PG&E’s much larger blackouts of October 2019 lingers. That became clear Friday when an independent branch of the California Public Utilities Commission recommended imposing a large fine on the company for missteps last year. The commission itself has not made a decision on the potential fine, and PG&E has a chance to respond formally by Nov. 17.

Under the office’s proposal, PG&E would have to pay about $101.3 million for not providing enough advance notice of the shut-offs to people who rely on electricity for medical reasons. Another $41.5 million would come because of PG&E’s faulty website, while the rest would be justified by the company’s failure to coordinate well with public safety officials and repeated communication shortfalls with other customers, according to a filing from the office.

“When a utility fails to provide these hospitals, fire departments, and people with medical conditions with adequate warning of its decision to execute a (shut-off), it is endangering lives,” Noel Obiora, an attorney for the office, said in the filing. 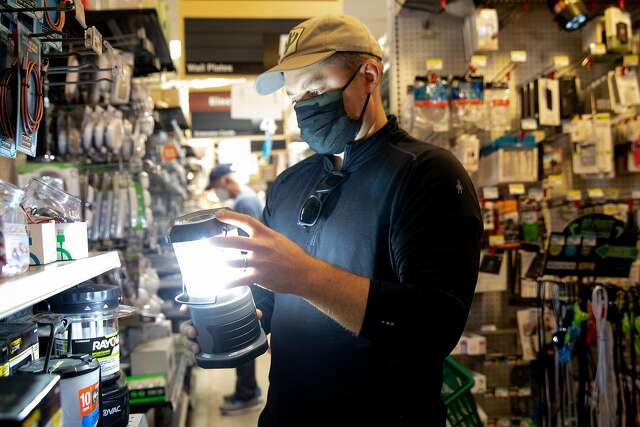 The office’s fine proposal came as part of a regulatory proceeding examining utility power shut-offs for fire prevention. PG&E spokesperson Lynsey Paulo said in an email that the company “recognizes the seriousness of the issues” raised in the proceeding and she acknowledged that “losing power significantly disrupts people’s lives, especially for those with medical needs and customers sheltering-at-home in response to COVID-19.”

Paulo said PG&E has worked to improve its shut-off program since last year and gave residents and businesses $86 million in bill credits after one round of poorly done shut-offs in early October 2019.

“We have made substantial improvements in the areas of customer notifications, support for customers — including those with medical or independent living needs, website and call center capabilities, and planning and working with local governments,” Paulo said in the email. “We will continue to make additional improvements to support our customers, while working to keep them safe.”

Still, like summer heat and winter rain or snow, losing electricity because of wildfire risk is becoming a seasonal experience in parts of California. And it’s not going away anytime soon.

This past week, a dry windstorm swept the state, threatening to damage the electrical equipment of major utilities and give rise to more monstrous blazes. So PG&E and Southern California Edison shut down parts of their power system. Events unfolded differently.

In PG&E’s case, roughly 345,000 homes and businesses in parts of 34 counties were affected by shut-offs this week. While patrolling its lines before restoring electricity, PG&E said it found at least 76 examples of weather-related damage, such as broken poles or trees and branches on electrical wires. The largest concentration of damage was found in the North Bay and Sierra Nevada.

The company believes that any of those could have started a dangerous wildfire, similar to the PG&E-caused infernos that decimated Paradise in 2018 and ravaged parts of Wine Country multiple times. PG&E has sought to improve its power shut-off program, but it has no plans to back away entirely from electricity cuts when the weather is dangerous enough.

Edison also turned off power this week, but for far fewer homes and businesses than PG&E. About 38,000 Edison customers lost electricity because of wildfire risk on Monday and Tuesday, according to the company.

One of the six Southern California counties affected was Orange County, where the fast-spreading Silverado Fire roared to life early Monday morning. Edison told state regulators that a “lashing wire” connected to a telecommunications line might have hit one of its overhead conductors and ignited the fire, which by Friday morning had burned 13,390 acres and was 63% contained.

Only three buildings have been destroyed by the fire, the cause of which is still under investigation.

Edison spokesperson Chris Abel said the power line in question was not included in the company’s fire-prevention shut-offs this week.

“The protocols we take into consideration include wind speeds and customer impacts, among other things, and, based on those factors, the circuit wasn’t de-energized,” Abel said.

He said Edison’s report was intended to put regulators at the California Public Utilities Commission “on notice” so the commission could conduct its own investigation. The company is cooperating with Orange County firefighters investigating the cause of the Silverado Fire, Abel said.

Mark Toney, executive director of The Utility Reform Network consumer group, said it’s “too early to jump to a conclusion” on the Orange County fire.

Edison’s potential link to the Silverado Fire has echoes of PG&E last October, when one of the company’s power lines set off the Kincade Fire in north Sonoma County. PG&E had turned off other parts of its electric system in the county but kept power flowing to the line ultimately deemed responsible for the fire.

PG&E has been desperately trying to avoid a repeat of its missteps last October.

Still, the reform network’s Toney said utilities need to do a better job of considering the costs that power shut-offs impose on customers.

“The fires from the generators. The impact on people’s health who are without electricity on medical devices. The cumulative amount of spoiled food that people have to throw out — these are never really measured and counted, because it’s not a utility expense,” Toney said.

Can PG&E Make 2020 Any Worse? PG&E is trying to stick it to you one last time in 2020.  The greedy company is capping off a year of murder convictions,