Crimes previously committed by Pacific Gas and Electric Co. hung over Bill Johnson for the entire time he was chief executive of the parent company PG&E Corp.

Effective Tuesday, Johnson will retire, handing control of California’s largest utility to a successor who also faces a new set of problems. The task of the next top executive, Bill Smith, is to keep the company stable while beginning to steer it away from its catastrophic past.

It won’t be easy. Not only does PG&E owe billions of dollars to the victims of previous wildfires sparked by its power lines, but the company also faces a profound challenge in what may be an acutely dangerous fire season this year. PG&E is under pressure from all sides to avoid causing more calamities while also reducing the use of its most extreme fire-prevention measure: power shut-offs like those that left millions of Californians without electricity last year.

The coronavirus pandemic adds another complication, both for PG&E’s more than 20,000-member workforce and the 16 million Californians it serves.

Shepherding the company through those headwinds in the near term will be Smith, a former AT&T executive who has been on PG&E’s board since October. As the interim CEO while the company searches for a long-term leader, Smith will be the fifth top executive of PG&E Corp. — including another interim chief — in just five years. 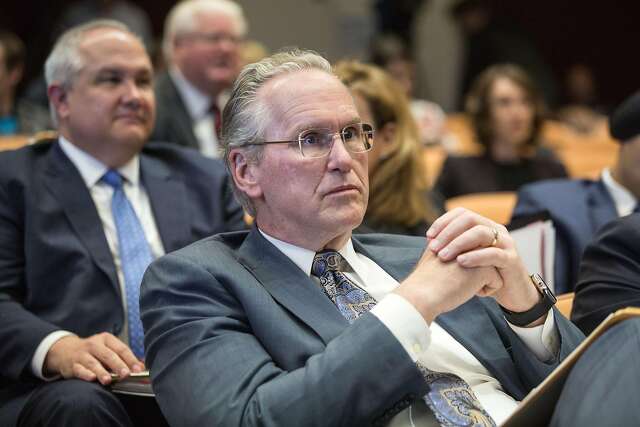 He assumes control of PG&E shortly after Johnson traveled to Butte County to appear in a courtroom to accept the company’s guilt over the 2018 Camp Fire, the deadliest and most destructive wildfire in California history. Smith also attended part of the Butte County proceedings, and both executives expressed regret over the fires.

The turnover at the top also comes just as the company resolves its bankruptcy that began last January because of PG&E-caused wildfires that killed more than 100 people and incinerated more than 20,000 buildings across Northern California in 2015, 2017 and 2018.

“He credits retiring CEO Bill Johnson for managing the company’s wildfire-related challenges under very difficult circumstances,” she said. “Smith plans to keep that work on track.” 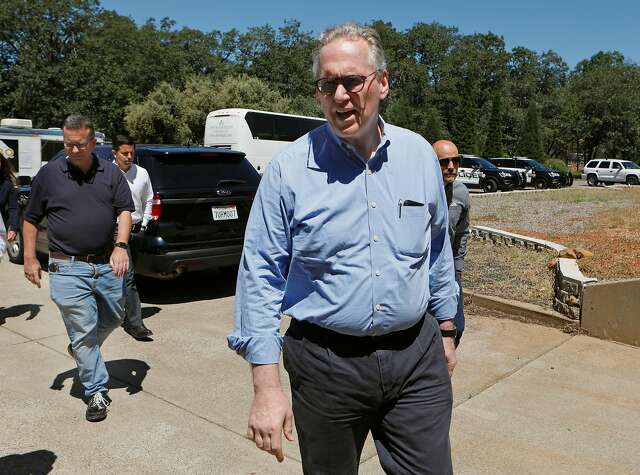 “Throughout his career, he managed organizations with more than 100,000 employees and contractors and led network and customer care efforts across a broad global footprint,” she said in the email. Smith’s compensation package won’t be approved until PG&E seats its new board when it officially emerges from bankruptcy, which the company currently expects to happen by Wednesday.

Throughout Johnson’s 13-month tenure, PG&E was working feverishly to get its bankruptcy plan approved in court and by state regulators. The process became even more urgent last summer, after Gov. Gavin Newsom signed a new law that required PG&E’s plan to be approved by Tuesday in order for the company to qualify for a new form of utility wildfire insurance.

PG&E ultimately met that deadline with time to spare. U.S. Bankruptcy Judge Dennis Montali confirmed the company’s plan June 20, a few days after he said he would do so because leaving fire survivors and other creditors “with no other options on the horizon is not an acceptable alternative.”

Bankruptcy was not the only major item on PG&E’s agenda while Johnson was in charge. Last fall, the company undertook a historic effort to prevent more fires by repeatedly turning off its power lines when fast, dry winds blew through Northern California’s parched landscape. 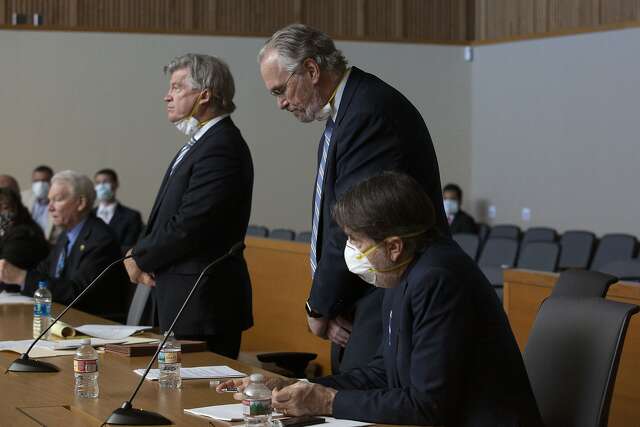 PG&E drew widespread criticism because millions of people were affected by the outages, some for days on end. The PG&E website also crashed amid high traffic, and local government leaders accused the company of poorly communicating its plans to them.

And despite its aggressive efforts, PG&E may be responsible for the October 2019 Kincade Fire. The company left one of its high-voltage Sonoma County power lines turned on even as it shut down other parts of the grid in the same area. A piece of that power line broke right around the origin point of the fire, the cause of which is still under investigation.

Critics believe the blackouts will define Johnson’s legacy at the company.

“A customer living their daily life isn’t following the ins and outs of the bankruptcy,” said Mark Toney, executive director of The Utility Reform Network consumer group. “People expect that if they pay their monthly bills, the bargain that they get … is that they have reliable, safe energy. Clean energy. And he did not deliver that, particularly during the fall.”

But Tom Dalzell, the business manager of PG&E’s largest union, IBEW Local 1245, said Johnson was limited because “he inherited a system that was built 100 years ago.” Reflecting back on Johnson’s time at PG&E, Dalzell said the outgoing CEO was likely unable to spend as much time on “big operational changes” as he had planned.

“He got some, but I think he came here thinking that was mostly what he was going to work on and it wasn’t,” Dalzell said. “He got them out of bankruptcy. He got them through a fire season. He got through a legislative season and he entered the (Camp Fire) plea.”

Dalzell recently spent about an hour and a half with Smith, who he said has “some good instincts” despite his lack of experience in the energy sector. Still, Smith clearly faces big challenges.

“He has to avoid fires, improve the (shut-offs) … and he’s got to deal with the move away from natural gas,” Dalzell said. “He’s got tough finances coming out of bankruptcy. There are a lot of challenges.” 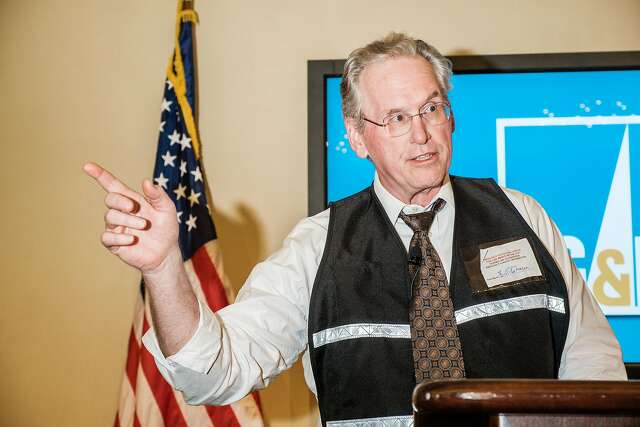 State officials have so far not embraced the most dramatic possible ways of reforming PG&E — such as transforming it from an investor-owned company into a government-run utility, an idea endorsed by State Sen. Scott Wiener, D-San Francisco, and some progressives. But they have laid plans to take more aggressive steps if PG&E-caused fires continue harming communities after its bankruptcy.

The California Public Utilities Commission has established an escalating enforcement process through which it can revoke PG&E’s operating license if the company further harms the people it serves. Also, state Sen. Jerry Hill, D-San Mateo, has authored legislation that would have the state transform PG&E into a new nonprofit called Golden State Energy if the company loses its license. The bill, SB350, was approved by the Assembly and was referred to a Senate committee.

A group of local government officials led by San Jose Mayor Sam Liccardo had proposed turning PG&E into a customer-owned cooperative similar to a credit union. While the idea is not coming to fruition anytime soon, Liccardo said it could “still be in play” should PG&E cause even more disasters.

Liccardo remains concerned about the state of PG&E’s electric grid and its debt burden after bankruptcy, among other matters.

“If there was ever a company well-suited to stumble, it’s PG&E,” he said.

Ultimately, the immediate responsibility for keeping PG&E on track will fall to Smith, the incoming interim CEO. And he must do so while facing a deep level of distrust from customers weary of all the death, destruction and disruption that the company has caused over the past decade.

“There’s no trust,” said Toney, the utility reform network leader. “Trust has to be earned. They’ve got a long way to go.”

Smith, who recently moved from Texas to San Francisco as he prepared to start his new role at PG&E, has no prior experience working for an electric and gas utility. But he spent nearly 40 years with AT&T and its predecessor companies, where he held a variety of operational roles, Paulo said.

PG&E, SDG&E and SoCal Edison are rapidly raising rates for essential heat and light despite the COVID crisis.   With lower-income Californians already bearing the brunt of the pandemic and resultant