Is it true that our electricity rates will be going down?

Many of us have felt the pinch of high electricity bills over the winter, and our bills only seem to go up. Well, it’s not your imagination. Electricity rates at the big three investor-owned utilities have risen relentlessly over the past few years. (1) 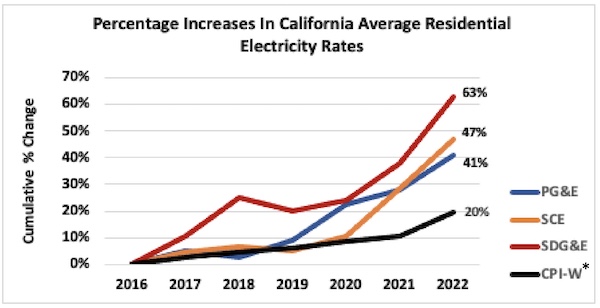 The rate increases combined with economic difficulties during the pandemic have resulted in nearly $2B in arrearages (bills not being paid). Power-intensive businesses (e.g., cold storage) say they are having difficulty competing since California’s rates far exceed those of neighboring states. 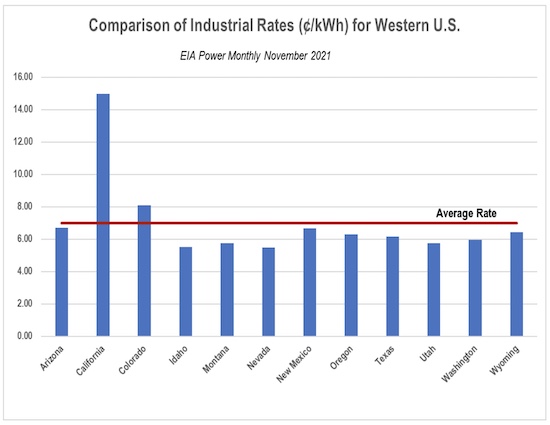 Help is on its way with bills, but that is a temporary band-aid; we have to do something about our ever-increasing rates. As Executive Director Mark Toney of consumer advocate TURN proclaimed in an impassioned speech at a recent meeting on affordability at the CPUC, “We need a time out!” (2)

As we’ve explained before in this blog, high electricity rates hit low-income households harder because electricity use is relatively flat across households of different incomes. Furthermore, high rates can dissuade customers from switching away from fossil fuels, making it difficult for California to hit its emissions targets. You can see some of those break-even operating prices for fuel switching in the table below, assuming gasoline is $4.64/gallon and natural gas is $2.20/therm. (3)

Our high electric rates can make it hard for fuel switching, especially space heating, to pencil out. This chart reflects fuel costs only and assumes gasoline is $4.64/gallon and natural gas is $2.20/therm. Source: Merrian Borgeson of NRDC (Natural Resources Defense Council) at the CPUC, 2022

The situation has become so pressing that the CPUC recently held a two-day meeting to generate ideas for ways to lower energy bills, and especially electric bills, so the state can accelerate the energy transition and meet its climate goals in a way that is affordable and equitable.

Suggestions for reducing electricity bills fell into three broad categories: reducing the cost of providing electricity, shifting some of the remaining costs away from ratepayers, and changing the rate design to allocate costs more fairly.

Reducing the Costs to Provide Electricity
Many suggestions were offered to lower the costs for utilities to provide power to our homes and businesses.

– Reduce utility investor profits. Senior Scientist Mohit Chhabra of NRDC suggested that we could reduce the big investor-owned utilities’ rate of return on equity, the profit that they make when they invest in new capital. (4) PG&E currently earns a guaranteed 10.25%, more than the industry average of 9.5%. Can that return be reduced to give ratepayers some relief? Chhabra’s analysis shows a reduction to 7% would save ratepayers 5-7% on electric bills. I asked him about PG&E’s argument that the utility takes on more risk to be in California, so the rate of return should be higher. Chhabra observed that the return on equity is guaranteed, so it is risk-free. If there is risk beyond that, he suggested that PG&E should be specific about what it is, and then we can understand how to reduce it.

– Spend wildfire money more wisely. Michael Wara, a local wildfire expert and Stanford Research Scholar, said that we should more carefully evaluate the value of different types of wildfire mitigation and coordinate spending across the state. He pointed out that last year we spent $4.5B to fight fires and $8.5B to reduce ignition but only $1.5B to reduce spread. He believes it might well be cheaper to tolerate more ignition by further reducing the spread. (Undergrounding transmission is much more expensive than forest thinning.) Brad Heavner, Policy Director for California Solar and Storage, added that microgrids can be cheaper than undergrounding in low-density regions.

– Reduce peak energy use. Several speakers mentioned that we can reduce costs by shifting demand away from peak periods (e.g., 4-9pm). This can reduce transmission costs (lower peaks mean we need less grid capacity) and energy costs (off-peak energy tends to be cheaper).

– Reform net metering. Many speakers touched on the need to revisit the state’s solar subsidies, which could reduce electricity bills by 10% or more.

– State ownership of some assets. NRDC’s Chhabra analyzed the impact of the state’s taking ownership of the transmission system from PG&E. As shown in the diagram below, this would save on costs because taxes would be reduced and we would pay less to bond-holders than to share-holders. Overall it would save 4-6% on bills, but it is a “very heavy lift” per Chhabra. He suggests that it may make sense (and be much easier) to transfer just the highest-risk transmission assets. In addition, he says it could make a lot of sense for the state to take ownership of new kinds of transmission, such as the undersea cables needed for offshore wind. 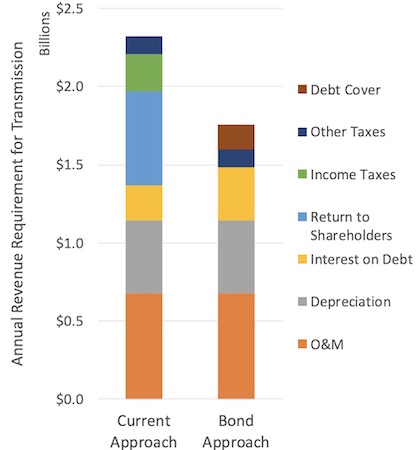 Public ownership of transmission would trade off shareholder profits and income taxes for new public debt. Source: Mohit Chhabra of NRDC at the CPUC, 2022.

Get Funds from Beyond the Utility Bill
California has historically put some charges on the utility bill that might be better assessed elsewhere. Where can we find non-ratepayer funds to cover these costs?

– Cover some costs with state taxes. Many speakers suggested that “public purpose” programs that are currently on the electric bill, such as wildfire reduction and bill subsidies for lower-income households (CARE and FERA customers), are more appropriately covered by state taxes. NRDC’s Chhabra clarified that this change would largely benefit middle-income customers since these costs are already absent from CARE and FERA bills.

Change the Rate Design
Finally, when we have unavoidable costs that must be paid for by ratepayers, we can change who pays and how.

– Add a fixed charge. There was broad support for a fixed-charge on bills. This would better align the variable rates with the marginal cost of providing electricity and encourage electrification. UC Berkeley economist Meredith Fowlie recommends that the fixed-charge be larger for higher-income households, as shown below. This idea was popular among the speakers, though others suggested varying the charge by service size, connection cost, or even dwelling size.

An income-based fixed charge can allocate costs much more fairly than a fixed charge. Source: Meredith Fowlie of UC Berkeley at the CPUC, 2022

It is painful to imagine an additional $150+ monthly fixed charge on every electricity bill, even for higher-income households. I asked Chhabra if he’s worried about grid defection beyond a certain point, and he said that he hopes to study that. He did observe that it’s a pretty complex endeavor to go off-grid while also acknowledging that $150/month seems high. He expects the regulators and lawmakers to work out what level of charge is appropriate, somewhere between $10 and $150.

– Deploy aggressive time-of-use rates and demand-response incentives. As mentioned above, discounted off-peak rates and incentives for further reducing demand at times of particularly high use will reduce transmission and energy costs by reducing peak usage.

All these ideas and more were discussed at the CPUC’s meeting. At the end of the day, there is no silver bullet, “no one obvious villain”, as Chhabra puts it, for reducing electricity bills. Chhabra continued: “The rates we have today are the compounding impact of 20 years of decisions. Our rates have always been high because of California’s wide geography (high costs) and temperate weather (low usage).” His analysis shows that even when multiple policies are stacked, the cumulative effect is still only about 25% (from $0.27 to $0.20).

If we were to remove CARE and Wildfire Fund costs from our bills, move transmission ownership to the state, reduce return on equity to 7%, and levy a $20/mo fixed charge, rates would decrease from $0.27 to $0.20. Source: Mohit Chhabra of NRDC at the CPUC, 2022.

Wara points out that rates are so high in part because it is easier to raise rates than it is to raise taxes. Many of the techniques for reducing rates will require the California legislature to intervene. (5) That may make it hard to move quickly, although Assemblymember Eduardo Garcia, Chair of the Utilities and Energy Committee, spoke at the meeting and was very supportive of making energy bills more affordable. (6)

California’s three goals of reducing emissions (e.g., electrifying cars and buildings), adapting to climate change (e.g., hardening our grid to wildfires), and transitioning affordably and equitably are imperative. But doing all three at the same time is not easy. I hope that the CPUC’s discussion and planning process will shake out some of the best ideas and push them through our layers of bureaucracy soon without much distortion.

So, is it true that our electricity rates will be going down? Maybe! Hopefully! If you want to help to make that happen, you can add your comment here.

Notes and References
1. For Palo Alto readers, the city has its own utility and its own prices. Electricity rates are much lower than for the three big investor-owned utilities shown, and for the local community choice agencies like Peninsula Clean Energy, Silicon Valley Clean Energy, and East Bay Community Energy that base their rates off of PG&E rates. And Palo Alto’s rates have remained more steady. But Palo Alto’s utility is subject to many of the same forces and has seen steadily increasing transmission costs over the last several years.

2. One of my favorite quotes from Toney’s pointed speech to the commissioners: “Skyrocketing rates don’t just happen by themselves! Skyrocketing rates happen because They Are Approved By The Commission.” Toney’s ideas aren’t uniformly popular, but he is clearly a passionate advocate for more affordable rates for lower-income households.

3. This chart does not reflect any ability to defray additional capital costs of fuel switching with lower operating costs. That would further lower the break-even electricity rate.

4. California’s regulations are designed so that utilities make money from their capital investments and not from their operating expenses (e.g., the daily cost of providing power). So they do not earn more money if customers use more electricity, except to the extent that requires additional grid buildout.

5. The CPUC can do some things on its own (e.g., require aggressive time-of-use rates), but not others (e.g., moving wildfire costs from the utility bill to the tax bill). Even establishing a fixed charge over $10 requires legislature approval.

6. Several speakers pointed out that water and broadband/internet also need to be affordable, but that was not in scope for this discussion.