The fund is part of a wider regulatory overhaul the Democratic governor unveiled Friday as he seeks to reach consensus with state lawmakers on fixing the crisis created by the collapse of PG&E Corp. , which sought bankruptcy protection in January after its role in sparking wildfires created more than $30 billion in potential liabilities.

Mr. Newsom outlined two possible models for a wildfire fund—one valued at $10.5 billion and another at $21 billion, aides to the governor said.

Under Mr. Newsom’s proposal, Southern California Edison and San Diego Gas & Electric would choose which option they prefer, with PG&E bound by whatever they decided but excluded from the decision-making process, the governor’s aides said.

“PG&E’s leadership is committed to continuing to work with the governor and all stakeholders on shared solutions that will compensate wildfire victims fairly and equitably and mitigate the ever-growing threat of wildfire risk,” the company in a statement.

Mr. Newsom is aiming to navigate pressure from Wall Street to limit utility exposure to wildfire risk, which has grown in recent years amid drought and climate change, while avoiding criticism from activists that California is bailing out PG&E, which has gone bankrupt twice in the past two decades.

“This does a relatively good job of trying to walk that line,” said Height Securities analyst Clayton Allen. 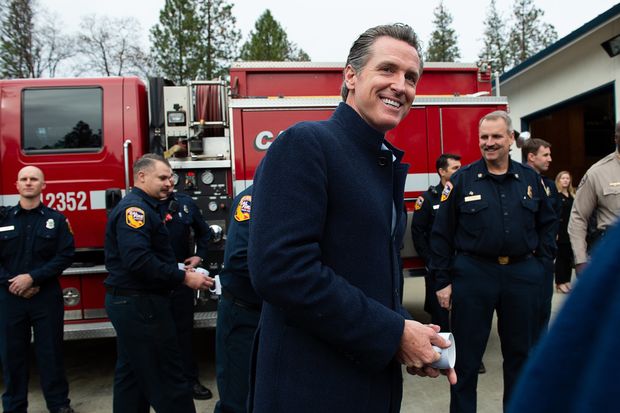 If Mr. Newsom’s fund proposal is approved by the state’s Democratic-dominated legislature, California utilities could use the money to offset future liability costs stemming from deadly wildfires. An unusual state constitutional provision puts utilities on the hook to pay property damages resulting from fires sparked by their equipment.

But they couldn’t use the fund to help cover costs from prior wildfires, such as last year’s Camp Fire, California’s deadliest ever, which killed 85 people and destroyed the town of Paradise. State investigators in May concludedthat PG&E equipment sparked the fire.

To access the fund, the utilities would have to comply with upgraded safety criteria. They also would have to collectively spend $3 billion on fire-detection technology such as weather stations and cameras. The companies would have to pay for those improvements without earning any additional profit on the spending through customer charges.

Edison said it is reviewing the details of the proposal. “We appreciate the governor’s continued sense of urgency on this important matter that impacts all Californians,” the company said in a statement.

Mr. Newsom has also proposed a new division of the utilities’ primary regulator, the California Public Utilities Commission, charged with setting more stringent safety standards for the utilities and periodically reviewing their safety cultures, the aides said. Utilities would have to get a new annual safety certification from the division in order to tap the wildfire fund.

The governor is hoping state lawmakers will act to create the fund by July 12, before they take a monthlong summer break, aides said.

“I am ready to work all night,” said state Sen. Henry Stern, a Democrat who represents parts of Ventura and Los Angeles counties that were hit hard by wildfires in 2017 and 2018. “But it’s hard to predict if everyone has the energy to get this done before we leave for the July recess.”

Driving the timetable is PG&E’s bankruptcy. Mr. Newsom has pressed the utility to quickly file a plan of reorganization, telling the bankruptcy court last month that the utility hasn’t “demonstrated that it understands the gravity and urgency of the situation.”

State investigators have tied PG&E equipment to 19 wildfires in the past two years, and homeowners, businesses, cities, insurers and others are seeking compensation for billions in damages from the company, an issue that will now be resolved as part of the bankruptcy process. 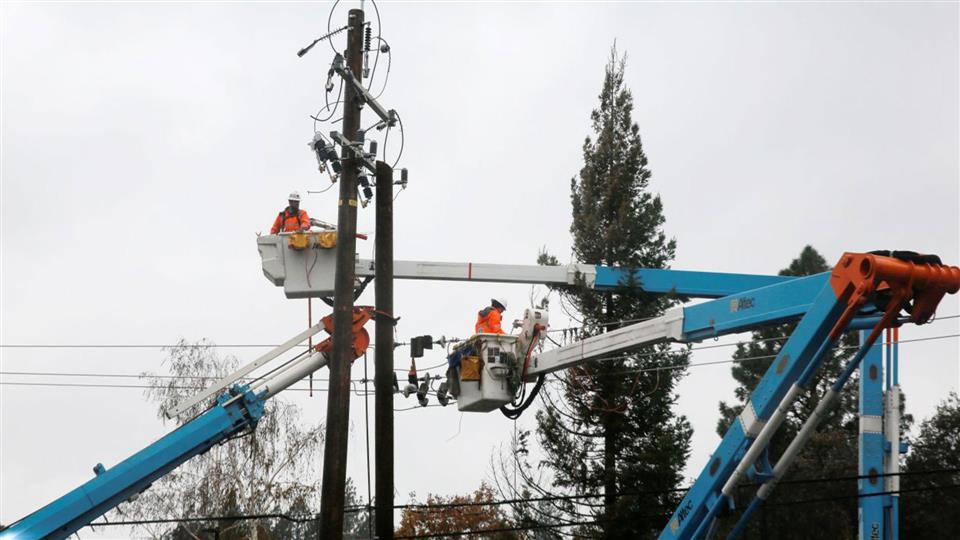 Credit-rating firms have also said they would further downgrade Southern California Edison and San Diego Gas & Electric if lawmakers don’t address the issue this summer, over concerns that PG&E’s liability problems could spread to the other companies if significant wildfires hit southern parts of the state.

Moody’s Investors Service analyst Jeff Cassella said the governor’s proposal had the potential to bolster the utilities’ credit ratings, but that the extent of the relief would depend on the details of the fund structure.

After meeting with lawmakers recently, Citi analyst Praful Mehta wrote that there was momentum in Sacramento to accelerate PG&E’s emergence from bankruptcy and bolster the state’s other utilities, calling it “very likely” that legislation passes by summer’s end.

Still, finding political consensus on a rescue plan could prove politically challenging, given the unpopularity of PG&E following years of fires.

Under Mr. Newsom’s proposal, the Southern California utilities would have 15 days after legislation is enacted to decide which of the wildfire fund options they prefer. The smaller option would be a “liquidity fund” that would essentially serve as a revolving line of credit funded by extending a surcharge California electricity customers have been paying since 2002.

That year, the Department of Water Resources issued bonds to pay down debt following the state’s 2001 electricity crisis. The surcharge had been set to expire in 2020. Extending it could produce about $870 million a year, which aides for Mr. Newsom estimated could be securitized over 15 years into a $10.5 billion fund.

The fund would provide cash up front to cover claims while the utilities collect the money needed to reimburse it over time. Only utilities determined to have acted prudently in managing their operations could recoup those costs from ratepayers. Otherwise, investors would foot the bill.

The larger option would require utilities to pay $7.5 billion up front and $300 million annually for 10 years to create what Mr. Newsom’s aides labeled an insurance fund that would provide greater liability protection and potentially cover some costs resulting from mismanagement. A utility that had acted safely would have full access to the fund and no reimbursement requirement. But a utility found to have acted irresponsibly would be required to pay a deductible in order to tap it and could not raise customer rates as a result.

Mindy Spatt, spokeswoman for The Utility Reform Network, a consumer advocacy group, expressed skepticism that the proposal would protect utility customers from paying higher electricity prices. She also criticized the surcharge extension as a means of capitalizing the fund.

“When those charges were added to customers’ bills, we were told they were temporary,” she said.

PG&E would have to resolve its existing claims and exit bankruptcy by June 30, 2020, or be shut out of the fund entirely.

“There will only be one fund,” an aide for the governor said. “So PG&E is stuck with whatever gets built.”